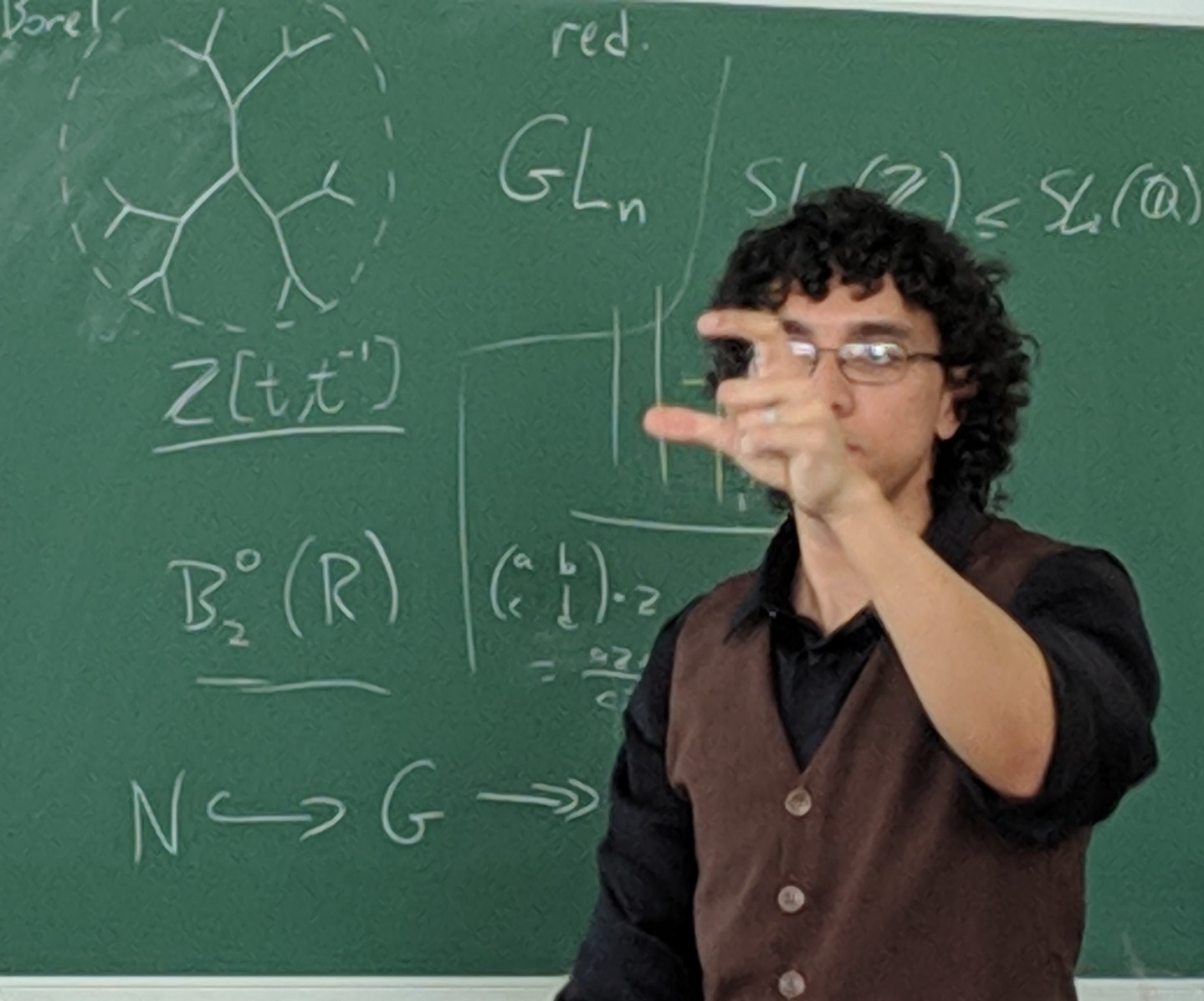 Sprechzeiten: by appointment (by e-mail or in person)

I am a postdoc (wissenschaftlicher Mitarbeiter,  ≈ research assistant) in the Geometry Group of Prof. Petra Schwer at the Otto-von-Guericke Universität Magdeburg.

My research concerns properties of spaces and of their symmetries. The fun part is that the term "space" can be interpreted quite broadly, from a hairy ball to a comic book-like multiverse known as Bruhat--Tits building, from fundamental geometric shapes to model spaces describing the motion of a robot.

In this area one can investigate a wide variety of problems. For example, regarding the space we could ask whether there exist serious obstructions in it (such as holes of various dimensions), whether it is curved somehow, what happens when we move "forever" (i.e. "towards infinity"), or whether we can describe what happens over time with an object moving in the given space under certain rules.

As for the symmetries themselves, we might want to know for instance how many there are, whether we can describe them in a simple fashion, how they transform objects in the given space, whether there are points left unchanged by the symmetries, or about the relationship between given sets of symmetries of two spaces (possibly even the same!).

In more technical terms, my work so far has been mostly in combinatorial/geometric group theory and related topics from topology. I had/have particular interest in presentations, (cohomological) finiteness conditions, Reidemeister classes, and algorithmic questions. As such, I am very fond of geometric, topological, homological, and combinatorial aspects of groups and spaces on which they act.

Groups that I like include (but are not limited to) matrix groups (algebraic, Lie, (S-)arithmetic,...), R. Thompson's groups and their relatives, locally compact groups, and Artin--Tits groups. In the topological realm I also enjoy things like knots and links and questions about low-dimensional spaces.

As a former member of the group of Theory of Compuation in Brasília, I am also interested in formal methods in mathematics and proof assistants. I recent times I am also puzzled by Costas arrays.

At the OvGU I organize the WISST! - das "What is..."-Seminar beim Tee!, where we get to learn new stuff from Maths and Didactics in an informal environment.

Recently I shared a few words about my academic path so far and the importance and meaning of the PETMAT Program in Brasília. The (online) meeting was part of an event on the 25 Years of the PETMAT/UnB, organized by Prof. Luciana Ávila Rodrigues and the current students of the PETMAT.

The previous Buildings Conference (2019) took place here in Magdeburg, organized by Petra and myself.

The IAG runs a joint Oberseminar, check out its homepage for announcements and program.
From the WiSe2017/2018 to the WiSe2018/19 I was also co-organizer of the Oberseminar Gruppen und Geometrie in Bielefeld.

In June 2018 I served as a reporter for the Oberwolfach Workshop on Cohomological and metric properties of groups of homeomorphisms of R.

Together with Benjamin Brück and Eduard Schesler I organized the Block Seminar on Arithmetic groups and rigidity, which took take place in Bielefeld in March 2018. The most recent Block Seminar, Constructions of aspherical manifolds and complexes, was organized by our colleagues from Regensburg and took place on the Frauenchiemsee in September 2018.

Due to the current Corona Pandemic, very few work trips (at least in Maths) can be scheduled. In turn, multiple online events are taking place worldwide.

I take the opportunity to urge everyone to follow the recommendations from their local health authorities (such as the Robert-Koch-Institut here in Germany) and let's do our best to fight the pandemic. Flatten the curve, be responsible, be compassionate, and stay healthy!

Outside the OvGU, you might have recently heard about my work at...

In recent (pre-Corona) times I might have been spotted at the following events:

Hier at the OvGU I give exercise courses, lectures, and (co-)supervise seminars and theses. Check out LSF to keep up to date with courses offered by our Institute. If you would like to write a Bachelor or Master's thesis in our Geometry Group, feel free to contact me!

In the past I was a Tutor for "Linear Algebra for Physics" and "Group theory" at Bielefeld, and a T.A. for "Calculus 1", "Calculus 3", "Introduction to linear algebra", "Algebra 2", "Algebra 3" and "Analysis 1" at Brasília.

In the current Semester I am responsible for the following courses. (For more information please check out the corresponding pages of the IAG.)

Follow this link to find out how to waste some serious amount of time (while having lots of fun!).

News from the IAG

Kai-Uwe Schmidt talks at the Mathematisches Kolloquium on July, 4